Peanut butter…well, that’s a completely different story. I don’t think there’s anywhere else in the world that uses as much peanut butter as the U.S., if they use it at all. Or if they even know what it is.

On our trip back to the Olde Country, my brother-in-law’s girlfriend was trying to figure out what the heck peanut butter is. Mind you, she’s an intelligent woman, with her own law firm and all. The woman can even cook, but the whole concept of peanut butter was beyond her. The conversation went something like this:

BIL’s GF: “So, what exactly is peanut butter?”

Me: “It’s just ground up peanuts.”

Me: “Well, if you’re making it yourself, you may want to add a tablespoon of peanut oil to make it smoother…but yeah, it should just be peanuts.”

GF: “So there’s absolutely no butter in it? Well I guess it can’t be that bad for you then.”

Apparently, the term “butter” throws people off. Outside of the U.S., it’s not seen so much as a texture, but as an ingredient. It made me wonder what foreigners think when they see apple butter or pumpkin butter in the market.
Until recently, I was not such a big fan of the PB myself (that whole cleanse thing I did about a year ago changed that–it was big on nut butters). I still have this theory that no one born outside of the U.S. can really really love peanut butter. A. isn’t a big fan. He’ll pretty much eat it if there is nothing else around and he is famished.

It’s probably like Aussies and Vegemite. Or living in Rome. You just have to be born into it or else it’s never going to feel natural.

So it shouldn’t have come as a total shock (though it kinda did) when I discovered that P was crazy about the stuff. But not in a I-will-have-a-PB&J-sandwich-everyday type of way. More like peanut-butter-reminds-me-of-home type of way.

When we were in Italy, we visited some friends who had just moved away from the Bay Area to live in Venice. They missed some American yumminess, including (but not limited to) dried mangoes from Trader Joe’s, Mexican food, and of course, peanut butter. They were super excited because they had just made a batch of PB using a very powerful food processor. They brought the jar out of the fridge, and P’s eyes just lit up.

Vigorous nodding was happening when I asked if she wanted to taste some. I took a spoon and started scooping some out. One spoon led to four, at which point I gave my friends the jar back. Poor things, I didn’t want P to devour their tiny jar of prized PB in five minutes.

Moments like these always come as a surprise to me. Logically, I know that P was born here and is growing up here. Emotionally, it’s still strange to be bringing up an American girl.

She probably won’t be a completely all-American girl, but much closer than an all-Iranian or all-Italian girl. She will most likely like chocolate more than lavashak (the original fruit roll-up…but without sugar and SUPER tart…what all the Iranian kids want as a treat) and know the names of all the Sesame Street characters (I still don’t know Bert from Ernie).

She’ll like Dr. Seuss and Maurice Sendak books, and wonder why I gush about Tintin all the time.

Will P really be as American as peanut butter? We may have to start her on Vegemite soon, just to stir the pot (or jar) a bit.

The other day I was walking to work when a bus drove by, the side of it practically screaming the new spring Gap ad with the following slogan: “Be Bright.”

I made a mental note of writing a thankful post for Thanksgiving, and then reminded myself that I would never remember. So I figured I would just do it now. If you can have Christmas in July, why not Thanksgiving in April?

Every weekend, I am thankful that I have a husband who is much, much cleaner than I am. He won’t rest until the bathrooms are cleaned, the house is vacuumed, and the wood floors are Swiffered. It makes me feel slightly guilty for not being so neat, but at least someone will keep me honest–and keep the house from being a complete hovel.

Even though P gets more colds than _______ [insert name of person you know who gets the most colds], I’m eternally grateful that the only health issue I have to deal with are sniffling noses and coughing. Knock on wood, tocca ferro, etc.

I’m so thankful that my parents live nearby, so all those sniffling noses don’t force us to decide whether to skip work or send a sick child to preschool.

I’m excited that close friends are having (or have just had) kids, so P will have playmates outside of her circle of friends in preschool and beyond.

I eternally grateful that someone (ahem, my mother-in-law) finally taught me how to fold fitted sheets, so our linen closet doesn’t look like a bulging mess.

I thank my lucky stars for fantastic friends near and far, especially when they do incredibly generous things like treating us to a hotel stay in Seattle.

I’m grateful that what I thought was a catastrophe a few years ago (being laid off during the height of the economic downturn) actually turned out to be a blessing, leading to a second career as a writer. Things like this will give me perspective when I’m in a funk or generally down on myself.

I’m beyond thankful that the second career in writing gives me the ability to work from home twice a week, saving me from a commute and giving me more time to spend with P.

I’m ecstatic that despite the responsibilities of a family, a job, and a new obsession with the Game of Thrones books, I have some time to jot down a few thoughts once in a while and have people like you read them.

Don’t wait until Thanksgiving. Tell me what you’re thankful for this spring.

We just came back from one of the best vacations ever, visiting the in-laws in the Olde Country. It was one of those vacation when you think…I totally want to move here. Until you slap yourself and think, wait, I already did that.

Anyway, I wanted to do a brief run-down of the 2.5 weeks, so here it is before I forget all the good bits.

So that pretty much sums up the vacation. As with every vacation, it was too short. Thankfully, I’m pretty sure we’ll be back.

[NB: I actually started writing this on January 1. I then got distracted.]

The Italians have a saying: “Natale con i tuoi, Pasqua con chi vuoi.” A rough translation goes something like this: Christmas with your parents (or family), Easter with whomever you want.

As a good Italian, A has lived by this rule most of his life. Of the 37 years he’s been on this earth, he has spent 34 with his family. This last Christmas marked only the third year that he was not in Italy with the whole gang.

We wanted to spend our first Christmas as homeowners in our new house. We bought a tree (a first!). Heck, we even chopped it down ourselves. (Just in case you didn’t know, a Christmas tree FARM is one of those places where they give you a dull saw and expect you to haul your own tree. FYI. In the off chance you were confused or something.)

We bought a string of lights, some tinsel, and hung up two (count ’em: TWO) ornaments. We had a lovely Christmas Eve dinner (menu: homemade lasagna [yes, including noodles] with mushrooms, roasted leg of lamb with tiny potatoes, and trifle for dessert) with my sister and her husband, and some dear friends. We went all out and bought a toy kitchen for P.

And then on Christmas day, my sister and I hopped in the car for a last minute road trip down to Southern California to help my parents pack up their home in the final chapter (hopefully) of their long move to Northern California.

Christmas and Boxing Day were spent in a flurry of packing, sorting, throwing things away, and most importantly, reminiscing. My parents lived in their SoCal house for almost twenty years…longer than they’ve ever spent anywhere (see my previous post about moving.)

You tend to accumulate a lot of crap in that span of time, especially if you’re big fans of 99 cent stores (which my father is, unfortunately).

Super-fancy decorations with markers, naming my fave bands and actors. A-Ha is on there not once, not twice, but THREE times. (I did have a thing for Swedes, apparently.) 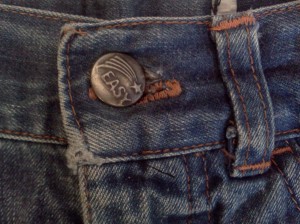 Just the slogan you want on a button on the pants of a 10 year-old girl.

No one saw the irony of putting that on a pair of blue jeans. It’s priceless.

“Natale con i tuoi” totally happened for the good Iranian girls this year. Next year, it might be the good Italian boy’s turn.

A lot of people have expressed an interest in the cleanse I mention in “Marathon Pants.” I didn’t feel comfortable “endorsing” a book or a diet on a national website, but hey, I can say whatever I want on my own blog, right? Anyway, it’s a book called Cinch!: Conquer Cravings, Drop Pounds and Lose Inches by Cynthia Sass. It worked for me, but who knows if it works for everyone. Good luck and thanks for reading!

And while you’re at it, take a second to “like” my blog. Thanks!