I know it’s a bit too late for a post-Halloween post (all the on-the-ball mamas probably did it by midnight of the 31st), but I’m definitely of the better-late-than-never mindset.

This year, P, along with every other girl in her preschool wanted to be a princess. OK, I take that back, I remember seeing a mermaid. And a Princess Leia (Disney’s newest princess?). When I saw the gaggle of children at the Halloween “parade,” aka children wildly running to their parents in excitement as teachers tried to make them walk in a line, my first thought was: why don’t any of the boys want to be prince charming? They were probably having too much fun being firefighters,  Humpty, and Dumpty to worry about rescuing all the girl preschoolers from the clutches of evil stepmothers.

I’ve already chronicled my own issues with Halloween elsewhere, so I’m generally pretty determined that P will have a different Halloween experience. So, donning her Cinderella dress and tiara, she ran around with the other kids, and ate her treats.

I’ll be honest: I had tried my best to have her pick another costume. Super Girl? Doctor? Anything else? The idea that someone of my flesh and blood could be so princess-centric is completely foreign. No one who knows me, even remotely, could ever ever in a million years call me a girly-girl.

Not being a girly-girl is practically unheard of in Iranian culture. Almost every Iranian woman (and I only say almost because I’m thinking of my sister as the other lone exception) wears gobs of makeup, is always immaculately put-together, wouldn’t dare sunbathe in order to keep a clear complexion, is always wearing incredibly trendy clothing, and more likely than not, has had some sort of surgical enhancement, and looks YEARS younger than her husband, even though they are probably the same age. I realize that I’m making incredibly huge generalizations, but I know a lot of Iranian women who fit this bill.

My lack of girly-girl-ness, however, came as a result of growing up in Iran. We moved from Iran when I was nine, and from the time I started school when I was six, I had to wear headgear to cover my hair. My solution, completely endorsed by my parents, who thought having to cover my hair at such a young age was completely ridiculous, was to cut my hair really short and pretend I was a boy outside of school. Minutes after the school bell would ring, I would run out of the building, tear off my headscarf, and sprint home. Ahhh what a heady feeling of freedom.

I got to be so good at pretending I was a boy that a second cousin, who was in the military, was able to sneak me into the military stables and have me hang around with the horses. The obsession with horses, a staple of all girl childhoods, was definitely not lost on me.

Once we got to the U.S., I tried to shed the tomboy tendencies, but it was difficult. I distinctly remember holding the door for an elderly couple at a restaurant, and being thanked in this way, “Thanks, son.” My English was still rocky, but I was shocked at not being recognized as a girl.

So I figured the next step to becoming a “real girl” was acquiring a Barbie. So I shamelessly begged for one. The only one I was allowed to have was Astronaut Barbie, since my mom was not too keen on the whole princess thing.

She did see the error of her ways at some point, though. I may have been the only teenage girl who was begged BEGGED by her mother to wear makeup (this generally happened in a frantic tone in the car as we were going to visit relatives, who were generally really well-put-together Iranian women). I was probably not the first teenage girl to be begged to wear lighter colors (I was no goth, but somehow she thought I was). All to no avail.

What I find fascinating is that my parents are now the princess enablers in P’s life. My mom is getting an early start. There’s no need to pretend P is a boy in America. My mom is definitely getting all the girly-girl potential she lost with me in P.

I generally find it pretty amusing, and despite half-heartedly trying to get P to wear a different Halloween costume, I try not to be too militant anti-princess. P has a pretty healthy curiosity, likes kicking and throwing balls and rolling in dirt as much as any other toddler–boy or girl.

And the following picture also gives me hope. 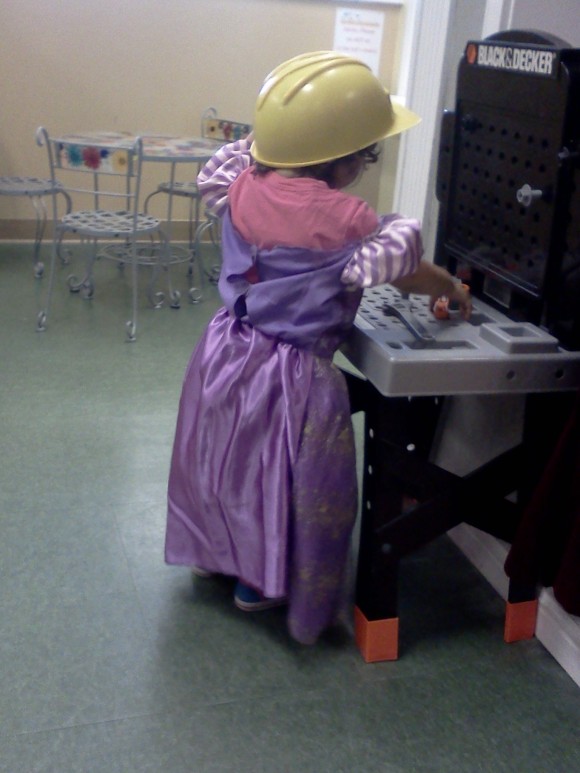 Any girl who goes to an indoor playground, dresses up as a princess and then proceeds to put on a hard hat and play with the Black & Decker toy tool set is probably going to be OK.

3 thoughts on “The Princess and the P”