[NB: I actually started writing this on January 1. I then got distracted.]

The Italians have a saying: “Natale con i tuoi, Pasqua con chi vuoi.” A rough translation goes something like this: Christmas with your parents (or family), Easter with whomever you want.

As a good Italian, A has lived by this rule most of his life. Of the 37 years he’s been on this earth, he has spent 34 with his family. This last Christmas marked only the third year that he was not in Italy with the whole gang.

We wanted to spend our first Christmas as homeowners in our new house. We bought a tree (a first!). Heck, we even chopped it down ourselves. (Just in case you didn’t know, a Christmas tree FARM is one of those places where they give you a dull saw and expect you to haul your own tree. FYI. In the off chance you were confused or something.)

We bought a string of lights, some tinsel, and hung up two (count ’em: TWO) ornaments. We had a lovely Christmas Eve dinner (menu: homemade lasagna [yes, including noodles] with mushrooms, roasted leg of lamb with tiny potatoes, and trifle for dessert) with my sister and her husband, and some dear friends. We went all out and bought a toy kitchen for P.

And then on Christmas day, my sister and I hopped in the car for a last minute road trip down to Southern California to help my parents pack up their home in the final chapter (hopefully) of their long move to Northern California.

Christmas and Boxing Day were spent in a flurry of packing, sorting, throwing things away, and most importantly, reminiscing. My parents lived in their SoCal house for almost twenty years…longer than they’ve ever spent anywhere (see my previous post about moving.)

You tend to accumulate a lot of crap in that span of time, especially if you’re big fans of 99 cent stores (which my father is, unfortunately). 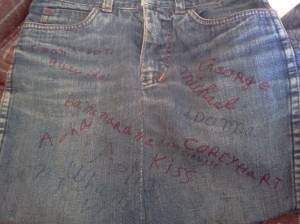 Super-fancy decorations with markers, naming my fave bands and actors. A-Ha is on there not once, not twice, but THREE times. (I did have a thing for Swedes, apparently.)

Just the slogan you want on a button on the pants of a 10 year-old girl. 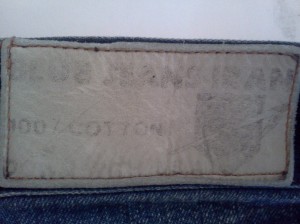 No one saw the irony of putting that on a pair of blue jeans. It’s priceless.

“Natale con i tuoi” totally happened for the good Iranian girls this year. Next year, it might be the good Italian boy’s turn.

But here’s why this whole move is even a bigger deal for me: ever since moving to the U.S. almost 25 years ago, I’ve moved about 20 times. Yes, you read that correctly 20 times, with and without mom, dad, sis, and husband. I actually think I’ve moved more than this, and I’ve just blocked the actual number from my memory. I’ve illustrated all these moves in my fantabulous drawing (drawn on the bus ride home from work, so it’s a bit messy): 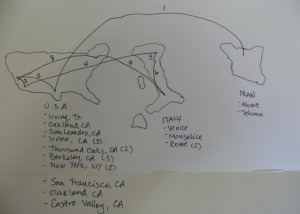 Yes, that squiggle that resembles France is supposed to be Iran. Also, I numbered the really large moves, and didn’t bother with smaller ones. And as you can see, I ran out of room on my large Moleskin, so I had to continue writing the U.S. cities on another page.

My parents finally bought a house and set down roots when I was a junior in high school. On the one hand, it’s amazing that they went from immigrants who came here without anything to owning a home after eight years.

On the other, those eight years meant a lot of moving on our part.

One interesting aspect of this is the nature vs. nurture argument. Apparently, siblings who grow up in the same household and are exposed to the exact same experiences have vastly different reactions to them.

My sister decided she hated moving. She moved up to Berkeley to go to Cal when she was finished with high school, and has stayed in Northern California ever since. She moved a couple of times in Berkeley, and lived in San Francisco when she was in law school, but she’s pretty much NorCal through and through.

I somehow decided that moving would be my thing. I ended up moving many many times more. For people who aren’t super visual and need more detail regarding the whole moving thing, here’s a complete list. I’ve also included all the cities I’ve called home in each country, and the number of times I/we moved within those cities (in parentheses).

Phew. It was exhausting just writing that. I could give military kids a run for their money.

Italians don’t move much, or at all. They live with their parents until they get married, at which point they move out. Renting? That’s just for poor folks and students (synonymous, right?). In fact, people move so little that when you see a posting in Italy for an unfurnished apartment, it means that there are no kitchen cabinets or appliances. You have to buy an entire kitchen to move to an apartment in the Olde Country.

Since we were married twelve years ago, A has had the pleasure of packing and unpacking boxes many a time. His mother affectionately refers to us as zingari (gypsies). But he, too, is tired.

To be honest, I want P to have a childhood closer to A’s than to mine. It’s not fun to change schools a million times and have to make new friends. It really isn’t. Maybe all that moving made me the super-friendly, super-fabulous, super-interesting person I am today (pat pat pat on the back). But maybe I would’ve been just as friendly and fabulous without the moving.

And I could answer the inevitable, “Where are you from?” without having to take an hour to explain the above spiel to the poor person who dared ask such an innocent question.